What is Florida Girls Hockey?

There are three levels of focus for growing the number of girls hockey players in Florida, expanding their development opportunities, collaborating with rinks and associations to create more intra state teams and development opportunities, and a set of elite/National Bound Girls teams under the Florida Alliance program.  The images below show how the program and these levels are structured.

The Florida Alliance Girls program is a strong program of elite and national bound teams for girls from 10U to 19U. They have their own website providing all details of their program.

Our Program Is Growing! Calling All Coaches Willing to Support Florida Girls Hockey!!

The state of girls hockey is growing leaps and bounds!  That means we are looking for more talented and dedicated coaches to help train and lead this growing population of hockey players in our state.  The success to any hockey program lies with the quality of their coaching staff. Since our Florida Girls Hockey program has multiple levels and is a statewide program, we are looking for the best coaches from all over Florida to support us in our mission to grow the game for girls and provide them as many opportunities to play as possible. From learn-to-skate training support at each rink/association, to being a practice/bench coach for an in-house/rec girls team at your local rink, to supporting or Florida Alliance Girls teams as a rostered coach or skills/off-ice trainer, we are looking for you!  One of our long term visions is to build a sold team that includes female coaches who work with girls to provide them both the skills as hockey players, but also as female athletes and female leaders beyond athletics.

If you are interested in joining our team, supporting girls as a coach and adult mentor, please complete the coaching application by entering information in this online survey courtesy of SurveyMonkey. Please only complete the application one time. If you need to make a change after submitting the application, please forward an email to the address listed below.

If you have any questions about the different levels of the Florida Girls Hockey Program or our Florida Alliance Girls teams, please contact us at the email address below. You may forward a written coaching resume to accompany your online application by sending it to: JNovotny@sahofhockey.org 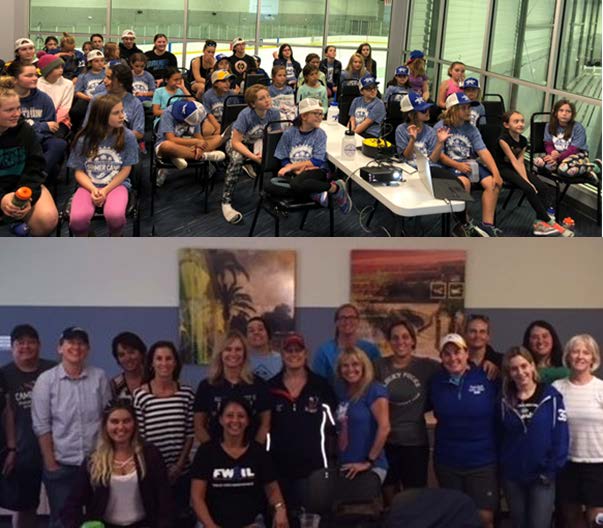 Florida Girls Hockey and our Florida Alliance Girls teams were formally unveiled at the 2018 SAHOF Board and Annual Meeting.  Since then, our program directors have been hitting the road to explain and answer questions about this program and to accept volunteers to support various aspects of the program.

May 12 - Florida GIrls Hockey was first presented to the parents and players attending the tryout session for the Florida Alliance Girls 14/16/19U tryouts at Ellenton Ice Complex.

June 13 - we were invited to present to 44 girls at a classroom session at the Tampa Bay Lightning's Lighting Made girls hockey clinic at Florida Hospital Center Ice in Wesley Chapel. This was the first girls-only several day clinic in their program's history. The girls learned about the past, present and future of girls hockey in Florida.

June 16 - the road show continued in a presentation to the Florida Women's Hockey League Annual meeting in Winter Park. We presented the overview of the program and showed how the sustainable future of the FWHL will in part be determined on the future of growing the girls game in Florida. The women's team expressed interested in supporting and Florida Girls Hockey will look to align with the FHWL season schedule so some girls events can take place in conjunction with the FWHL tournaments to bring resources together.

June 17 - Florida Girls Hockey was unveiled to parents and players at the first tryout for the Florida Alliance Girls 12U team at Skate Zone in Lake Worth.

August 18 - Florida Alliance Girls 14U and 16U National bound teams began their season with their first team practice at RDV Ice Den.

August 25 - Florida Alliance Girls 12U Elite team held their final round of tryouts at RDV Ice Den and selected players for their 2018-19 team roster.

October 20 - Breast Cancer Awareness at Ellenton Ice. Florida Alliance Girls 12u and 16u teams practiced and in the showcase event the Alliance 14u team played the Gulf Coast Flames Peewee A team.

January 2019 - The Florida Alliance Girls 12U team will be the host team for the inaugural Mrs Hockey that will be held at Florida Hospital Center Ice.

If you would like to hear more about Florida Girls Hockey, or participate in a presentation about this program, please contact Jeff Novotny at JNovotny@sahofhockey.org.